One of the many advantages of small town living is that community comes naturally. With just a little pro-action and organization, we can start being the change we want to see in the world and experience the results on a small scale.

Case in point, the folks at Frenchtown Fresh, a family run vegetarian juice bar and restaurant on Race Street in the heart of Frenchtown, decided they’d like to see their food waste go to good use. Proprietor Betty Anne Bechtold knew that we kept a flock of chickens on Mad Lavender Farm. She suggested that we might like to pick up their 5 gallon buckets of scraps from their juice bar and feed them to our chickens. My husband Don and I loved the idea, as it really helps to support the “zero waste ideal” that we work toward on the farm. Feeding the chickens healthy scraps rounds out their diet nicely. Betty Anne and I tag team the effort; she drops off her buckets with us on her way home from work. We drop the empty buckets back off in Frenchtown.

The scraps that are not suitable for the chickens go into our compost heap. Because we add a lot of straw from our goat stalls into the compost, the food scraps heat up the mix and help to break the straw down more quickly into compost.

We started composting years ago and I cannot imagine throwing my food into the waste stream anymore! When we dine out at restaurant, we always take our scraps home for the chickens and/or the compost pile. Imagine what a truly sustainable system would look like in our towns, where organic matter was routinely diverted out of our waste stream and used to regenerate our soil and to better support organic farming. Healthy soil, rich in micronutrients, does not require the heavy doses of pesticides currently used by conventional farming methods to try to control insects. We face enormous challenges in shifting to more sustainable practices in our communities and a grassroots effort, involving incremental changes, can help to start to make the difference.

Mad Lavender Farm is a “build it and they will come” kind of place. We knew we had a gem of a farm in a great location and we knew we wanted to also grow a community of spiritually minded people. The magic is in discovering who will come.

Leslee Penny came to visit the farm in 2019. It was a casual visit without an agenda other than a curiosity she had about farms in this area. She introduced herself and as we chatted, our common interests became apparent. Leslee felt an energy about Mad Lavender Farm that we hear about quite often; that there is a feeling of peace and serenity and that this is a special place. We are located at a particularly high altitude geographically on a road that was a Lenni Lenape trail and the indigenous people surely must have been drawn to the natural springs that are in proximity to our land. (Imagine a time before the concept of “private property” when the abundance of the earth was accessible to all, revered and respected by humans).

Leslee was clear that she wanted to be connected to our farm and hoped that we would be open to hosting her offerings in spiritual practice. A little bit about Leslee: as a teenager she trained in martial arts, meditation and Eastern philosophy and became proficient in Taekwondo. Eventually married and happily settled with a family, Leslee was in a severe car accident resulting in a near-death experience that rocked her world. She saw that illnesses like cancer were rife in her family and friends and Leslee found herself looking to alternative medicine for ways to heal all the hurt she saw around her and within. She resumed her training, taking a deeper dive into Eastern and indigenous medicine and other healing modalities.

Twenty years later, Leslee in an instructor for Sound Healing Meditation, Tai Chi and hypnosis. Affectionately known as Shaman Birdy, she works as a shamanic practitioner, bringing her knowledge of all these disciplines to her workshops. She now devotes herself to spiritually helping others heal their pain, find their true self and take their life in the direction they were meant to go.

We are truly blessed to have Leslee Penny at Mad Lavender Farm. Check out her workshops and events under Spiritual Practices on our calendar. Coming up on Saturday June 5th is her Cacao Fire Ceremony as well as her Shamanic Prayer Arrow Ceremony. We are doubly blessed to partner with both Clean Plate Kitchen and Leslee  Penny on the evening of Saturday, June 19th for a Sound Bath & Farm Dinner. The ticket includes a vegetarian dinner from Clean Plate, followed by a Sound Healing by Leslee Penny in the tipi. Not to be missed! 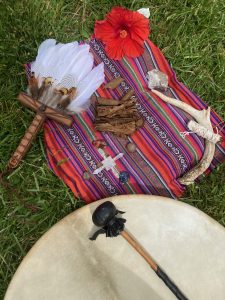 Kate Moxham was born and bred in Hunterdon County. I was raised here, too, a generation or two before. There is something about being raised here, witness to the development of farmland into houses and to the current trend back to small farms that feels so hopeful. As a kid, I spent time in the woods, listening to the trees rustle, watching the light play over creek beds, picking wildflowers and dreaming. I know Kate spent her playtime in the woods, too. Some of us are drawn to the wild and Kate and I were lucky enough to grow up here in this gorgeous river valley.

Kate went on to study biology in college. She had planned to go to grad school to become a Physicians Assistant to follow her desire to help people. But she fell in love with plant biology, conservation and ecological study. During a subsequent internship with the Natural Resources Conservation Service Kate was led to farming. Farming organic vegetables for years led her to the discovery of medicinal herbs and then, she said, it was like a light switch flipped. Herbalism tied everything she loved together: her love of plants, her desire to help people and organic farming.

There is still some wild left in Hunterdon County and, thanks to women like Kate and a growing interest in foraging and medicinal herbology, there is a better chance that it will remain untouched. If you prefer a field of wild flowers over a tightly manicured lawn, if you question the proliferation of toxins to control “weeds” and wonder about the properties and benefits of these so-called weeds, if you are curious about the natural world at your very doorstep, then you will want to attend Kate Moxham’s Foraging Wild Herbs Workshop. Kate lives by the credo that a good herbalist is respectful of traditions and plants and never takes more than they need. A good herbalist treats people, not the disease. Treat yourself to some of Kate’s wisdom.

Katie came to the farm on recommendation of a friend who said we had to meet and that Katie was an herbalist who would be a perfect fit for Mad Lavender Farm. As it turns out, Katie is more a person who creates space than fits into it. When Katie ONeill creates space for her workshops, for instance, you feel as though you’ve walked into an apothecary from the 16th century. Herbs and elixirs are displayed in pretty bottles and jars, tea is poured from a Moroccan teapot and it is all laid out beautifully upon a tapestry draped table. Her love for the natural world is expressed in everything she does so her workshops are more than informative, they are a sensory experience.

Like all the best teachers I know, Katie is always engaged in learning more; taking classes, reading, traveling and exploring. Every time I check in with her on Instagram I am witness to her great sense of adventure and her curiosity; be it a trip to Findhorn, Scotland, therapeutic immersion in the ocean in the middle of winter, or discovery of a new medicinal plant remedy. Thanks to her input, the varieties of herbs in our garden are increasing every year. Katie advised us to plant Tulsi Basil last year and now we’ve fallen in love with it. It is an amazing herb with so many beneficial qualities. Katie takes a deep dive into it with her workshop “The Medicine of Tulsi: A Meditation and Plant Medicine Making Journey.” This year we are introducing an herbal tea blend we call Dream Catcher that will complement Katie’s workshop “Dream Weaving: Tap into your Dreams with Herbs & Ritual.” Herbalist, Flower Essence guide, and student of Medical Astrology and Celtic traditions, Katie is offering a plethora of herbal remedy workshops from May through October. Check them out at www.madlavenderfarm.com/events.

Meet the Mad Lavender Goat Yoga Teachers: Lea, Jenn, Ava and Shannon. They are my Dream Team. Ava and Jenn have been with us since the beginning and they have fine tuned the goat yoga experience over the past four years to what it is today. Shannon and Lea are brand new to teaching goat yoga. They approached us specifically to teach goat yoga on the farm because they were passionate about wanting to do this. It takes a special kinda yoga teacher to run goat yoga events. She needs to have great yoga chops, a good sense of humor, an ability to think outside the box, be quick on her feet and of course she needs to love goats. And now our goat yoga teachers need to also play singing bowls! Shannon and Lea have come through it all with flying colors.

We introduced a new dimension to goat yoga last year when Ava had the idea to begin her session with a smudge ceremony followed by singing bowls. Smudging is a tradition that helps to ground us in a sense of the sacred. The vibration of the singing bowls helps to open the heart and mind to the present moment. Our guests are brought to a lovely elevated state and then the goaties are introduced and all hell and hilarity breaks loose. For those of you who have never experienced singing bowls, it gives you a little taste and for those who are already sound bowl enthusiasts, it’s a nice bit of healing vibration. Sound Bath Goat Yoga has been a winning combination and is now regularly scheduled on our calendar.

If you love sound bath and would like to enjoy a Sound Bath in the tipi without goats, there are several events presented by sound healer Leslee Penny that include sound healing. Please take a look at our Workshops & Events in the category of Spiritual Practice.